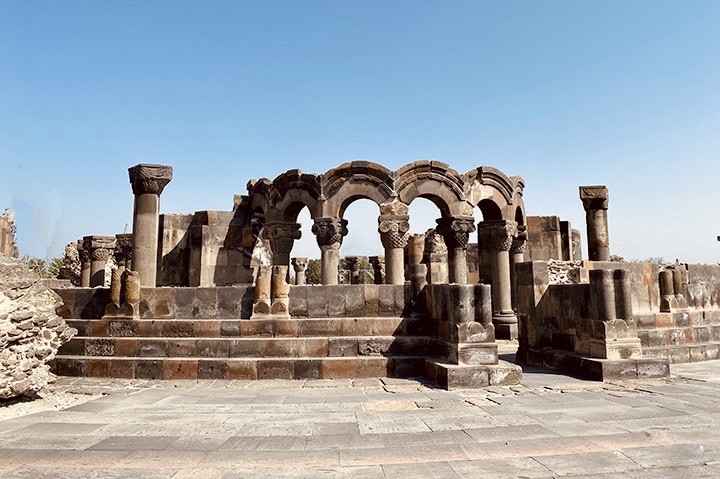 «Zvartnots is not a ruined monument but a prolific school where every fragment and ornate stone is a centuries-old teacher…»
Toros Toramanyan
The Historical-Cultural Museum-Reservation of “Zvartnots” is situated in Zvartnots District, 3 km east of the city of Echmiatzin, Armavir Region, Republic of Armenia, 15 km west of Yerevan. According to the medieval inscriptions this place was previously called Arapar.
The complex of Zvartnots consists of a cathedral and secular buildings (the palace of the Catholicos, utility rooms, a bath-house, a wine-press and a well). The remnants of a 5th century single nave church are preserved in the south-east of the complex.
The cathedral of Zvartnots, otherwise also called St. Gregory of Arapar, was erected by Catholicos Nerses III the Builder in 643-652. The three-tier, central-domed cathedral of Zvartnots, which is cruciform inwardly and circular outwardly, is the logical continuation and the climax of the old building traditions of Armenia with its splendid magnificence, forms, structure, as well as its rich and peculiar artistic decoration.
According to specialists, the cathedral was destroyed by an earthquake in the late 10th century.
Armenian historiographer of the 7th century Sebeos names the cathedral “Zvartnots”. As he states, Armenian Catholicos Nerses III of Tayk “…decided to build a residence for himself, near the holy churches in the city of Vagharshapat, where they said King Trdat had come to meet St. Gregory. There he built a church in the name of Heavenly Angels, realm of heavenly hosts, that came as a vision to St. Gregory”. According to the 7th century historian Movses Kaghankatvatsi, the cathedral was consecrated in 652.
The archaeological excavations of the site of Zvartnots began as early as the 90s of the 19th century. In 1893 Mesrop Ter-Movsisyan, a monk from Ejmiatsin, started excavating the hill, but soon he had to stop his work due to the absence of the official permission. In May 1900, Senior Archimandrite Khachik Dadyan resumed the excavations under the auspices of Catholicos of all Armenians Mkrtich Khrimyan (tenderly called Khrimian Hayrik, by the Armenians); by June he had already unearthed the cathedral ruins. In the spring of 1904, the excavations were supervised by architect Toros Toramanyan. Studying the preserved parts and found fragments of Zvartnots in details, he recreated its original appearance and elaborated its reconstructing project in 1905.
T. Toramanyan’s project of reconstruction of Zvartnots still remains a unique work based on serious and trustworthy scientific substantiation, which is well-known throughout the scientific world.
From the 40s of the 20th century the territory of the cathedral was periodically repaired and renovated.
In 1937 a museum was founded in the south of the cathedral close to its ruins. Until the early 1990s it had only a small exhibition displayed in a single hall. The revised and supplemented scientific exhibition of the museum was held in 2012. The permanent exhibition, which is displayed in three halls, consists of archaeological, historical and architectural parts.
In 2000 the archaeological site of Zvartnots was included in the UNESCO List of World Heritage Sites.